For a long time, marijuana (cannabis, pot, weed, or a thousand other names) has suffered under prohibition in the United States. Although many individual states had already instigated their own legislation, it was the 1937 Marijuana Tax Act that effectively prohibited all use of cannabis on a federal level.

But fast forward to the present, and society’s attitudes toward weed have made some dramatic u-turns.

2012 was the real turning point, when Colorado and Washington became the first ever states to legalize the recreational use of marijuana for adults aged 21 years or older.

Today, smoking weed is broadly legal in 30 states in the US, however, the majority only allow the consumption of marijuana for medicinal purposes. 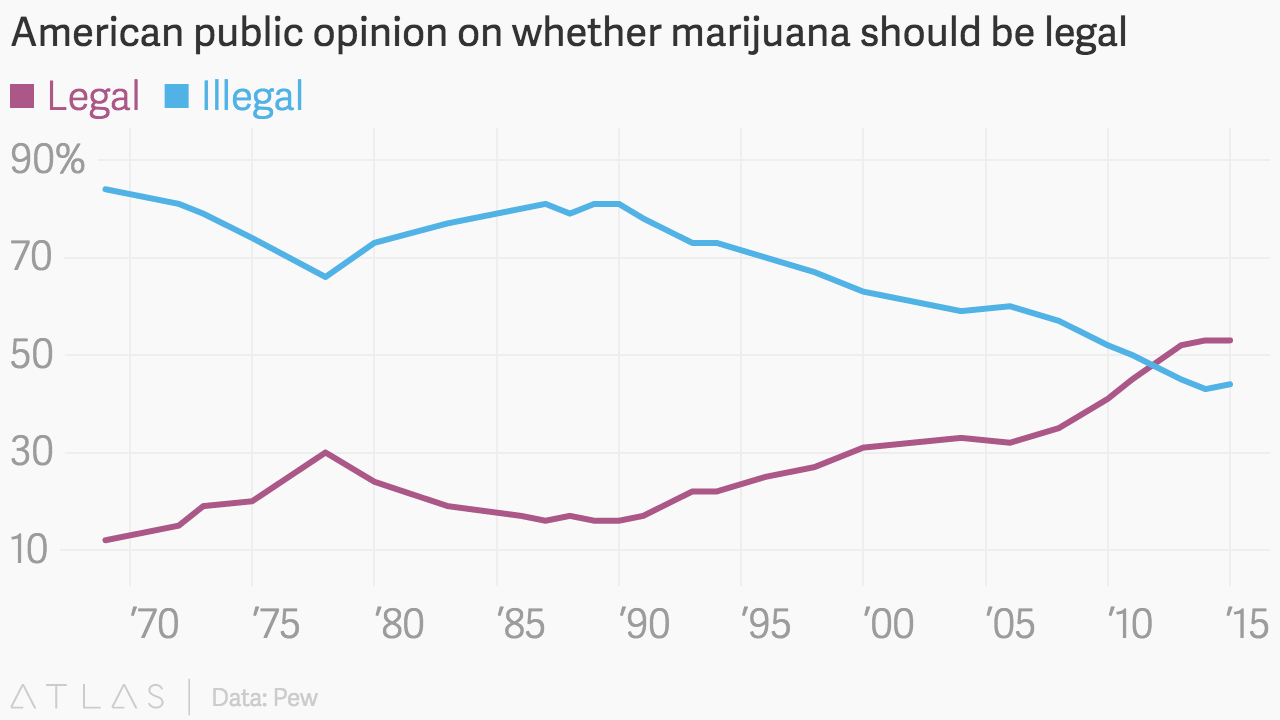 American public opinion on whether marijuana should be legal. Image: Altas.com

Why the change in attitudes towards marijuana?

Laws have to adapt to the needs of society as a whole. For many citizens, a total prohibition on marijuana made no sense – for many reasons.

First, there’s classification. Why should marijuana classed as a harmful substance when statistics have failed to find a single recorded instance of anyone dying from a fatal dose of marijuana alone. On the other hand, alcohol-related deaths total 88 thousand every year, the figure for prescription drugs is even higher.

Secondly, the decades-long war on drugs has been hailed by experts as a set of “failed policies and failed practices”, tackling neither the issues of drug trafficking nor drug-related violence. Contrast this with Portugal a country that decriminalised all drug use 15 years ago, and has not seen a significant increase in drug use during that time.

There’s also the issue of money. Marijuana is a huge growth industry right now. North American marijuana sales topped $6 billion in 2016 and are forecasted to hit $20 billion by 2021. And money is very good at changing people’s attitudes.

But lastly, and perhaps most importantly, there’s the growing widespread acknowledgement in medical and scientific communities of the huge potential benefits of cannabis derived medical products.

Although it’s still extremely hard for scientists to conduct effective research into the potential medical benefits of marijuana, current evidence points to a myriad of uses for medicinal marijuana, from chronic pain, multiple sclerosis, seizures, Cron’s disease and much more.

The effect of cannabis on sleep

Although cannabis has a number effects on sleep architecture, many studies have shown cannabis to be an effective sleep aid due to its effect on the body’s endocannabinoid system to relieve stress and produce a sedative effect.

The number, as well as the availability, of cannabis-based medications increases, but are they really as effective as the labels suggest?

Some suggest that cannabis-based medications have several advantages compared with traditional prescription sleeping pills, such as Behadryl, Lunesta, and Ambien, citing cannabis as being less addictive and more effective for long-term use, promoting muscle relaxation, and improving mood.

Early investigations of the effect of cannabis on sleep gained momentum in the 1970s. Even though they produced mixed results, the interpretation of findings was considered unreliable due to small sample sizes.

More recent investigations have provided data on various qualitative and quantitative sleep-related measures. According to them, the current understanding is still clouded by mixed findings. However, there are some important patterns emerging.

Sleep has five stages, and cannabis affects all of them. Specifically, it can change the duration and intensity of these stages. 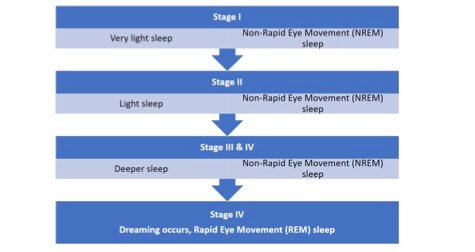 The Stages Of Sleep

The First Stage of Sleep

The person finally falls asleep. The stage typically lasts for 7-10 minutes, but could take longer if the person experiences pain and stress. Given that cannabis can relieve both of them by providing the relaxation feeling, its impact on this stage is positive.

The Second Stage of Sleep

The sleep is still light at this stage and the person could wake up very easily. According to the research, cannabis provides the least impact on it.

The Third and Fourth Stages of Sleep

Often, these stages are viewed as a single one. They are the most restorative and cannabis prolongs them. Therefore, it can provide a positive impact here as well.

The Fifth Stage of Sleep

This is the most important stage during which dreaming occurs. The research claims that cannabis use decreases REM sleep, so a frequent marijuana user has a lower occurrence of dreaming. This effect is explained by the fact that cannabis blunts response to dopamine.

However, even though cannabinoids have the potential for promoting sleep, the studies on their effect caused contrasting findings.

For example, studies using high doses of tetrahydrocannabinol tended to produce an activating response in participants, while the ones using low dose reduced sleep latency.

The reason that explains different findings is the nature of tetrahydrocannabinol’s influence. According to scientists, this component produces excitatory effects while the sedating mechanism activates later.

But does the science has the solution for reducing stimulating effects and promoting sleep in those who suffer from sleep disturbances?

Enter cannabidiol otherwise known as CBD. This is another interesting cannabis constituent that has been known to counter stimulating effects of tetrahydrocannabinol. It is the second most active component that is used in a variety of cannabis-based medicines (CBM) designed to treat various health problems, including sleep disorders.

Although the administration of CBMs containing CBD has been shown contrasting effects as well, the dose and the timing of administration were critical factors to increase the effectiveness of treating insomnia and related disturbances.

Is There Really No Safe Amount of Drinking?

Your heart will benefit from any cutback.

How 5-Minute Walks Every Half-Hour Can Counter Prolonged Sitting

A short intervention with big impacts

A tech boost to boost your diet.

Why February Is a Better Month for Resolutions

We must look back before looking forward and ask ourselves these questions.

Budgeting to Get Out of Debt

Your Team Doesn’t Need You to Be the Hero

How To Be A Man According To 15 Dads

"What's the most important lesson you want to teach your son about being a man?"